We sincerely congratulate all of humanity in general and the Catholic Church in particular in electing you as Pope. 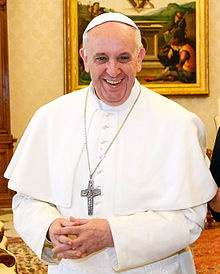 We sincerely congratulate all of humanity in general and the Catholic Church in particular in electing you as Pope.

We are even more delighted that the Holy Father is always an advocate for the poor and afflicted. Therefore, even though you had just posted, we do not hesitate to send this letter to you to continue the work that we have previously requested of former Pope Benedict. We again ask the Holy Father to intervene with the so-called "the Communist government of Vietnam", and demand the release of all activists for human rights, freedom, democracy, and territorial integrity of Vietnam in the spirit of non-violence.

So far, the so-called communist government of Vietnam, despite the intervention of former Pope Benedict, continues to violate the freedom of speech and freedom of religion on a suppressed people. The so-called "the Communist government of Vietnam" has imprisoned and arrested those who struggle for justice, human rights, freedom, democracy and the territorial integrity of Vietnam. These are violent, wicked and severe human rights violations.

31- Member of the Vietnamese Party of Progress NGUYEN Phong

and people under house arrest like the most Venerable THICH Quang Do, Dr NGUYEN Dan Que,

All these people are now under house arrest or imprisoned, continue to live in extremely difficult conditions (lack of care, almost no food, medicine ...)

The reason that the Vietnamese Communist authorities jailed them is because they demanded freedom to practice religion, freedom of speech and freedom of thought, expression of political views and protect the territorial integritymoderate in the spirit of non-violence.

In addition to the suppression of the democracy, the so-called “Vietnamese Communist Government” also increased persecution of religion through the expropriation of land, the establishment of Catholic, Buddhist, Hoa Hao, Cao Dai and destruction of the Holy Cross Catholic. Events increased the “Lang Mai” Plum Village, Catholics, Buddhists, gospel, are prohibited by religion and brutally beaten by inhuman Vietnamese Communist police. This is concrete proof that the freedom threshold of religion is violated drastically in Vietnam.

The so-called “Vietnamese Communist Government” totalitarian party rule, corruption, abuse of power, violence, police, staging, force, torture and intimidation. This regime is clearly contrary to the interests of the country and people of Vietnam and defiance of international law.

In order to prevent all acts of repression, abuse, violation of human rights and religious freedom, we appeal to the Holy Father to address the Vietnamese Communist authorities to respect and implement radical Vietnam and International Law:

- The so-called “communist government of Vietnam” must be in compliance with the Charter of the United Nations ;

- Free immediately and unconditionally all innocents who struggle for human rights, including political prisoners and prisoners of conscience, since their detention is a serious violation of human rights provisions of Article 19 of the International Covenant on Civil and Political rights, the Convention that the communist government of Vietnam has signed

(Note: These rights are also outlined in the Constitution of the Communist authorities Vietnam).

If the Vietnam Communist Party and the so-called “Vietnam communist government” remains stubborn and continues to disregard the warnings of the Vatican, after many encounters between the Pope Benedict and the Communist leaders, international public opinion is that intelligence within the Viet Cong (Vietnam Communist) in the Vatican. As an example, Archbishop to Hanoi Joseph Ngo Quang Kiet was a defender of peace and justice and a staunch anti-communist was forced to resign while Pope Benedict was on a Holy Land pilgrimage tours International Fatima in Portugal dated May 13th 2010.

Therefore, we would be very grateful to the Holy Father, a spiritual leader that we always respect, if for any reason that can not help us with the dissolution of the communist regime in Vietnam moderate in the spirit of non-violence, please help the Vietnamese people by:

1 / Official public prayer meeting with the participation of the Provisional National Government of Vietnam to comfort, bless the victims that were killed by the Viet Cong, or those who are generally imprisoned;

3 / Holy Father grant an audience with the Prime Minister of Provitional National Government of Vietnam who is designated by three generations of Vietnam in 1990 and has three official U.S. presidents contacts, integrity, after Vatican you have for the Vietnamese communist authorities have too many opportunities to see them, including Mr. Nguyen Phu Trong is not the head of the so-called “Vietnam Communist Government”.

We strongly believe in sympathy and charity, the Holy Father does not reject all social classes, religious politics. Everyone should be equal, fair and responsible before history, and conscience Court Justice. Respectfully ask you to accept this place respects our deep appreciation.

-       Copies of this letter have beensent to true leaders worldwide, all media agencies, newspapers, voluntary agencies, non-profit and the Vietnamese people.

-       A copy of this letter is also on file at the Provisional National Government of Vietnam.

Official Letters must be checked to avoid any grammatical or typing mistakes....this is a proof of respect to receivers...
For example: (Signed & Seal) .Copies of this letter have been sent (1 space)