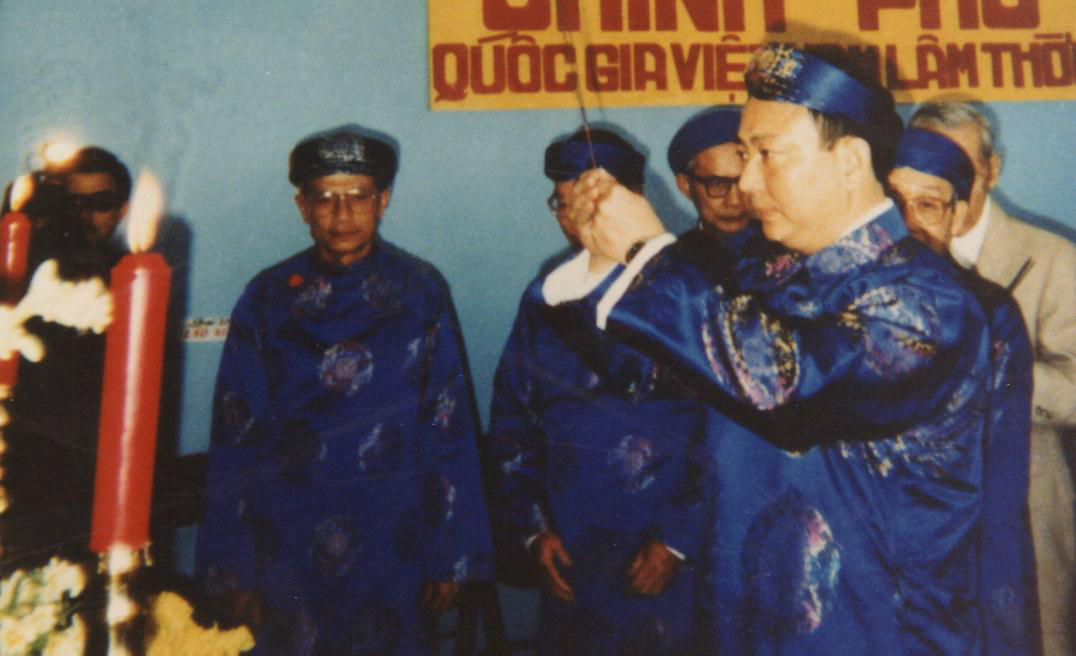 Vietnam established new government on October 21, 1990 and the selected Prime Minister has been January 16th, 1991 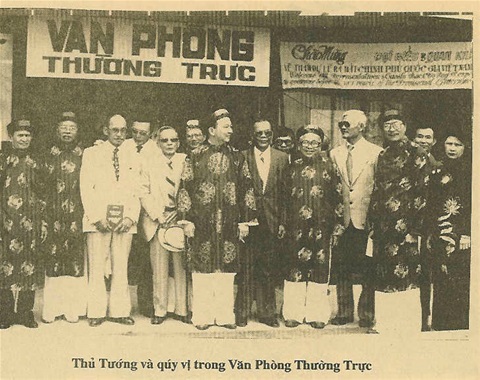 Prime Minister Dao and his cabinet

Twenty Eight (28) years ago, since the Hanoi communist regime invaded Saigon, the Vietnamese people, including businessmen, ex-soldiers, former Republic of Vietnam officers, and intellectual immigrants all over the world, have silently joined together to form an organization called: The New Democracy Movement in 1985.  This organization publicly elected Mr. Dao Minh Quan, the founder and author of “The New Humanitarian” and “The New Democracy’s”, to be President of the Central Executive Committee of this movement in 1989.

This organization demanded free and fair election for Vietnam. They have created a successful campaign named “THE FOOT SMASHING OF HO CHI MINH’S FACE” as a strategy to screen their selective members and to recruit the Ex-Vietnamese Communist in the struggle to fight against the remaining Vietnam Communist party. One of the important goals of the New Vietnamese Democracy is to unify all the hope and desire of the freedom-loving Vietnamese to become a National Resolution to discharge the dictatorship of communist in Vietnam.  They convoked a “Democracy-Unite” congress held on October 21st, 1990 in Orange County, U.S.A. in the head quarters of the New Vietnamese Democracy located at 12812 Brookhurst St. Garden Grove, California for referendum about forming a Vietnam overseas Government and obtained 100% of the general assembly’s votes. At the same time, the attending Vietnamese Congress entrusted duties to The New Vietnamese Democracy movement to invite and to call upon the Vietnamese patriots to form the new cabinet in The Provisional National Government of Vietnam.

They have invited Mr. Nguyen Tran, an old intellectual of South Vietnam to take a position as Prime Minister. Mr. Nguyen Tran has been appointed a permanent office and conferred Mr. Dao Minh Quan as the head supervisor.  But two weeks later, Mr. Tran under communist pressure became very ill and resigned his position.

At that moment, the political situation became very urgent.  The General Assembly was pressed to invite all qualified people together to select a new Prime Minister. But, no one desired to accept this serious primary responsibility. At the same time, an ex-communist group from South Vietnam led by former general Tran Van Tra on the way to The United States of America, tried to contact the newly formed VN Government.  He requested to talk directly to the Prime Minister. Therefore, the representatives of the three generations of Vietnamese including Elders, Middle Aged, and Youth all over the world urgently held many conferences for selecting a new Prime Minister.  Finally, they agreed to request Mr. Dao Minh Quan to accept this responsibility as the Prime Minister. He refused with the reason being that he was young and with not enough credibility for this important duty.

There were many Vietnamese elders who came from long distances, such as Mr. Trong Nghia, representative of Dan Su Viet (Viet’s History) from Portland, Oregon. Mr. Hai Trieu, an author and poet from San Jose, Northern California, and many other representatives of their generations, religions, organizations exchanged and discussed their points of view on acceptable qualities and characteristics of a new leader, who could lead the National of Vietnam in this difficult situation.

Mr. Tran Ngoc Duong, a former staff commander to the regiment Bac Tien (Northbound Regiment), assistant to the Staff Officer of South Vietnam’s Psychological Warfare and chairman to the Pre-75 communists’ POW’s Association in Saigon, Vietnam.  Mr. Tran is currently advisor to the POW’s in the USA and secretary general to Southern California’s Division of the Vietnam Tan Dan Chu (the New Vietnamese Democracy Movement). He repeatedly spelled out his great admiration to Mr. Dao Minh Quan’s leadership that he had collaborated in the past 4 years with this movement.  He also expressed his respect to Mr. Dao, despite his youth, humbleness, persistence and virtues of a dedicated person, who has demonstrated his political awareness, currently president to the Vietnam Tan Dan Chu.  Mr. Tran has been spontaneously moved and burst into tears in apprehension of Mr. Dao’s refusal to previous requests by the people to accept the responsibility as to the excuse of his unprepared ness and political popularity in assuming the new role.

In these conferences, we also recorded Mr. Nguyen Duc Sy, AKA Chanh Trung, a writer. He is also a former staff officer to the South Vietnam’s Commandos and chief officer of Intelligent in Gia Dinh province.  Mr. Sy wholeheartedly requested Mr. Dao Minh Quan, in the urgency of millions of suffering Viet people under communists’ inhuman yoke, domestic and in refugee camps alike, to accept the responsibility of history to eliminate the barbaric Vietnamese communists.  He believed the Vietnam’s Youth is the only generation capable of stopping inhuman communism in Vietnam.

Mr. Pham Vu, an Elder 77 year old and former chief administrator to Ha Nam Ninh Province, discussed with the representatives of three necessary and sufficient characteristics in a leader: Humanity, Intelligence and Courage. He also expressed with his own reservation, his judgment that Mr. Dao Minh Quan, a young person of national destiny and national momentum, associated with his own country, has expressly demonstrated the acceptable and sufficient elements and characteristics, is capable of being a Prime Minister to the Vietnam’s National Provisional Government.

Mr. Trong Nghia, representative to Le Nghia Liem Si Viet Society has also emphasized the three important factors: Sovereign, Permanent and Clear, to propose in selecting a capable leader for the Viet people. He also proposed that Mr. Dao Minh Quan is capable in this new role as a Prime Minister to this New Vietnam National Provisional Government.

Mr. Truong Bon Tai, an engineer from Portland, Oregon, called the conferees to support Mr. Dao in the new role as the Prime Minister.  He stressed the vital human factor that Vietnam Tan Dan Chu has depicted in trying to recruit a national elite.  He expressed his view on the role and norm of a political refugee is to reconfirm the anti-Communist stand in expressly signing the campaign leaflet “THE FOOT SMASHING HO CHI MINH’S FACE.”  He also confirmed that Vietnam Tan Dan Chu has this clear-cut anti-Communist and effective campaign.

During the conferences the people were touched by Mr. Tran Van Anh’s ordeal and his feelings of a regular Vietnamese national in the last three political regimes in Vietnam before the communist invaded of South Vietnam.  He told the audience he’s ready to sacrifice even his own life and his family’s safety in Vietnam to support the New Vietnam National Provisional Government as well as Mr. Dao to serve his country effectively.

Despite the long duration of these conferences, the representatives in the seminars have shown no signs of the least tired or distraction even though the meetings were continuously 10 hours long. For the first time, since after 1975, in these conferences, within two months, everyone has heard the real cries from the Viet People overseas, firmly fighting against inhuman communism and expressed their support to the new Vietnam National Provisional Government to rid of the inhuman, atheistic communists in Hanoi.  The atmosphere in these conferences was very moving and unanimous.

It’s worth to note that the representatives came from many places and regions. Many different organizations, associations, parties, many generations unanimously and firmly proposed and requested Mr. Dao to assume the role of Prime Minister of the New Vietnam National Provisional Government and there was no criticism to this young person. Mr. Dao Minh Quan has vehemently refused to be assigned by the conferences to lead the newly formed government.

He also called the representatives to be patient in order to insert a better person to serve the people of Vietnam. Mr. Dao, however, eventually accepted, because of the conferee’s genuine persistant, the new role as a Prime Minister to this new Vietnam’s National Provisional Government.

It was questioned, nonetheless, how could a young man of 39 years of age being active on politics only a couple of years obtain an absolute credibility from the conferees so much?  The answer is never before has the people’s desire to liberate Vietnam from communism as strong as it is now, expressed democratically and unanimously in these conferences. A simple but big ceremony to take an oath from the Prime Minister has been celebrated on February 16th, 1991 also 2nd January, new year of lunar calendar in Orange County, California.

Hundred thousand Viet people have joined their Government. They created the representatives offices located in all the refugee camps at Indo-China including Philippines, Thailand, Indonesia, Hong Kong, Japan and Malaysia. After these refugee camps closed by savage settle of High Commissioner Refugees and host government, the entire Vietnam Tan Dan Chu members have been repatriated. Extraordinary, the Vietnamese Communist cannot annihilate this organization, discrepancy; the Vietnam Tan Dan Chu has grown everywhere. More than that, at overseas, Vietnam Tan Dan Chu as known as “TAN DAN” established many offices in Northern, Southern California, USA, Switzerland, French, German and Australia to receive all support for their campaign “FREE AND FAIR ELECTION FOR VIETNAM”.

As their leader, Mr. Dao Minh Quan has express in the eleven nation’s conference 5 years ago at the Ukrainian decoration: “We are fighting for the freedom, the new democracy, the peace and the new order of the whole world and also for the future of ourselves and our children. Communist must be eliminating. We must hold together all the freedom and independence-loving people. Our country must be prosperous and our children should not have to suffer painfully anymore like we are. They must be born and to grow into manhood with smiling, brightened, cheerful, morality and sufficiency. No one can stop this basic right of the people. No one can extinguish this fire from the bottom of the hearts of the people.”

In the wake of the self destruction of the international communist all over the world, the ruling communist monopoly in Vietnam that was once a prosperous country in Asia, but becomes now the most poverty stricken nation on earth. The end of Vietnam communist  has  come. We hope   that all people  suppressed  by communist, and all the freedom and new Democracy loving people would become allies to support the common cause of mankind to overthrow the last remnants of communism. Let’s get rid of communism as soon as possible for the sake of freedom and the new order of the whole world. Do not be humiliated by a few economical profits to defraud your conscience and your honesty. We strongly believe that finally the righteous cause will prevail and communism will perish. In overseas, after the Vietnam political organizations failed people’s trust, yet at this time, the people’s confidence ought to return and burst out. The country of Vietnam is waiting something from Mr. Dao Minh Quan. Are these a good sign and the new tides for the country of a free Vietnam? This country has suffered so much. We wish the best for this new leader, who has sufficient energy and courage to lead the “Vietnam National Boat” to overcome any storms to a Safe Haven, and to the Harbor of Happiness.

Nowadays, many Vietnamese patriots, including Ex-Vietnamese communists have joined Mr. Dao Minh Quan’s leadership, which will ensure that the Vietnam Communist regime will have to accept the demands for a free and fair election for Vietnam. Otherwise, they could be crushed until they are eliminated.

The Provisional National Government of Vietnam is established 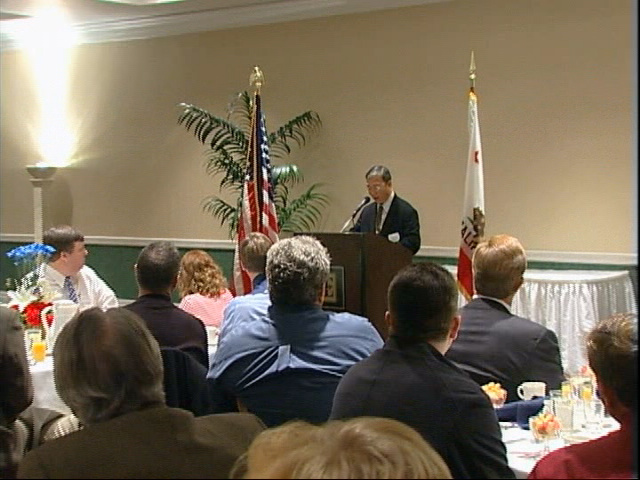 Don Ortega journalist reporting on the events the Prime Minister of Vietnam National Provisional attendance to salute the national flag of Vietnam in San Jose with tens of thousands of Vietnamese people attended on June 23rd, 1991

President of Allied Associated of America affirmed support and full confidence in the leadership of the Prime Minister Dao Minh Quan.

Prime Minister Dao and the Provisional National Government of Vietnam are invited to attend and read the discussion at the conference in the Soviet bloc countries fought for autonomy and their independence. 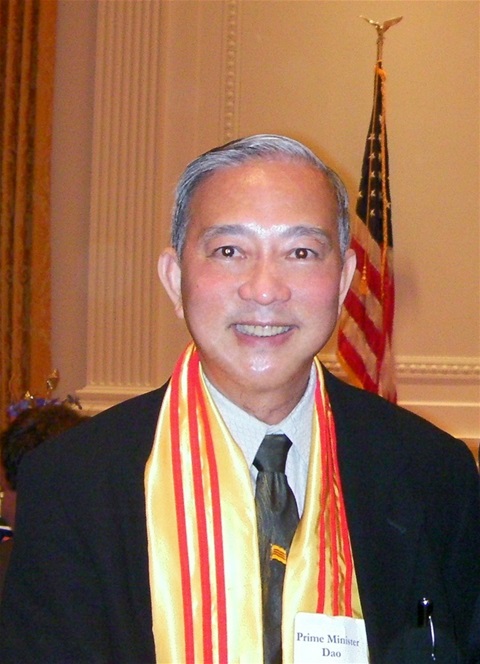 1991-Current: Prime Minister to the Provisional National Government of Vietnam